The Show Must Go On

On December 1, in one 24 hour period, Chennai in the southern Indian state of Tamil Nadu had 300mm of rain – the wettest day in one hundred years. Coming on the back of a November which delivered three times its normal rainfall with 1,024mm, the city was semi-submerged. That’s hard conditions for training.

What’s the best excuse you’ve heard for someone not getting to work… or if they do get there what is the most popular reason for arriving late? Roadworks, traffic like you’ve never seen on the motorway, awful journey, train ten
minutes behind schedule, bike had a puncture, bus cancelled. Whatever the reason, the excuse is likely to seem pathetically weak compared to this.

On December 1, in one 24 hour period, Chennai in the southern Indian state of Tamil Nadu had 300mm of rain – the wettest day in one hundred years. Coming on the back of a November which delivered three times its normal rainfall with 1,024mm, the city was semi-submerged.

And the rain kept falling. In places, normally dry, the water was four and a half metres deep – yet some staff at Maersk Training reported for work, in fact had to be told to go back. During this time instructors at Maersk Training were in the middle of running two courses, one maritime and one drilling, and the participants, who were from Thailand and India, had to be confined to their hotels. Regardless, the courses had started so local Managing Director Satya Mitra Bagga, decided ‘the show must go on.’

The problems didn’t stop when the rain did, in fact it was in the aftermath of the deluge that the worst conditions occurred. Chennai is normally drained into the Bay of Bengal, by two eastward flowing rivers, the
Cooum and Aydar, but they couldn’t cope and levels continued to rise as water came from the hinterland.

Earlier, over a two-day period, the population faced electricity and communications blackouts as the water level cut off the local grid and then radio masts. Diesel generators would spark into action, but one by one they went down as fuel ran out. 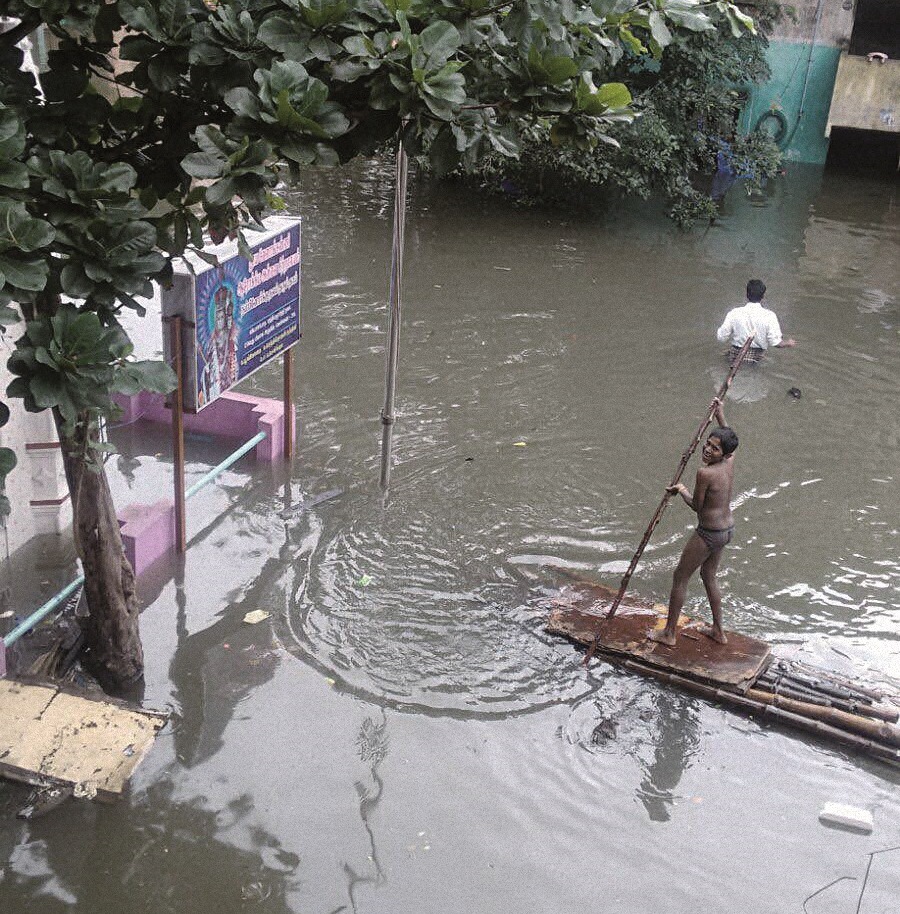 The runways at the international airport were 1,250mm under water; roads were canals and rivers, lakes. The participants’ hotels were running low on food and had rationed guests to one meal a day, rice or lentils.

‘Sometimes the networks would work and we could sneak in an occasional call reminding the course participants not to move out of their hotel location,’ says Satya.

‘On the second day, in the afternoon the water stopped rising, we moved out and we took a high SUV – sports utility vehicle – our business development manager has a very high SUV and went to see the participants and told them we’d run the course from the next day.’ This they did in the hotels and then ferrying the participants to the training centre for simulator sessions.

Proud to be Indian

India from a Governmental administrative point of view can sometimes be accused of failing to respond to the challenges of nature, but Satya was full of praise and admiration for his fellow Indians, ‘I have never seen anything like this weather before, never seen so much destruction, but at the same time I haven’t witnessed so much physical work, compassion, social work, volunteering in my life. There were people there cooking for others, going door-to-door collecting clothes, delivering clothes and helping in rescuing people. I was very happy that a whole community could look after themselves.’

And his team looked after the participants on the Well Control and Danish Maritime Law/§16 courses. On completion they got them home via a 350km journey to Bangalore from where they could catch a plane to Bangkok and other parts of India.