Home / News / What more can we learn from the “fly guys”?

What more can we learn from the “fly guys”?

In the cockpit there is skill, not fear, communication, not confusion. So how do they do it? People skills chief instructor Morten Kaiser and psychologist Frank Lamberg Nielsen flew to Gatwick to see a pilot and first officer being put through their paces – a bi-annual skill check upon which the aviators’ jobs relied.

The early images of men falling out of the sky, wrapped up in confused bundles of string wood and canvas and severely injuring themselves were perhaps the catalyst for creating an ultra-safe industry that flies along a perceived precipice of danger. If you have a fear of flying, statistics say your thoughts of possible injury and death are far removed from reality. You are 25,000 times safer in a plane than travelling by car. 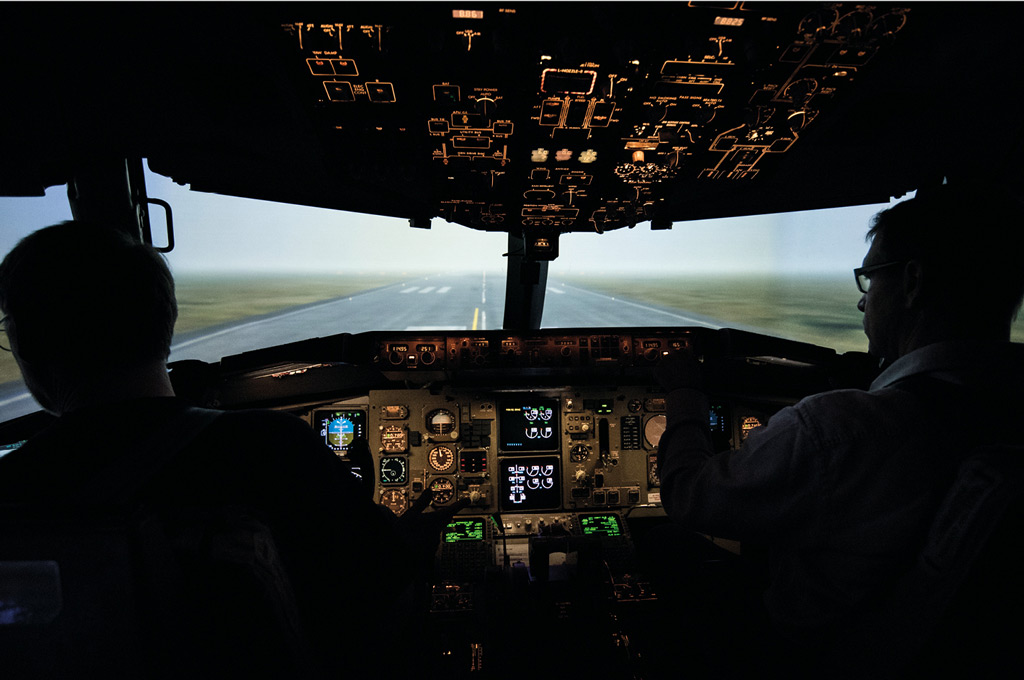 Aviation from its blood-speckled pioneering days has set the highest of benchmarks for safety. The industry quickly realised that the only way is up when you want to get down safely. In eSea26 we saw how the recurren­ce of accidents in the early days became the stimulus for training – crew resources managed to create efficient processes and continuous safety awareness. The simulator grew out of this persistent pursuit for perfection, alongside the wartime battle for survival for fledgling fighter pilots.

Maersk Training has been at the forefront for the adoption of simulators to ensure a more fulfilling and all-round educational programme in its three core industries, maritime, wind turbine and oil and gas. But what more can be learnt from the fly guys?

Despite being revered for its achievements, the aviation industry is in no way complacent, in no way happy to stand as number one on the safety platform and say ‘look at me’. But that is precisely what Morten and Frank wanted to do. They wanted to be in the ‘jump seats’ to observe what exactly is extracted from the four hour session the two aviators were put through in the Boeing 767 simulator. 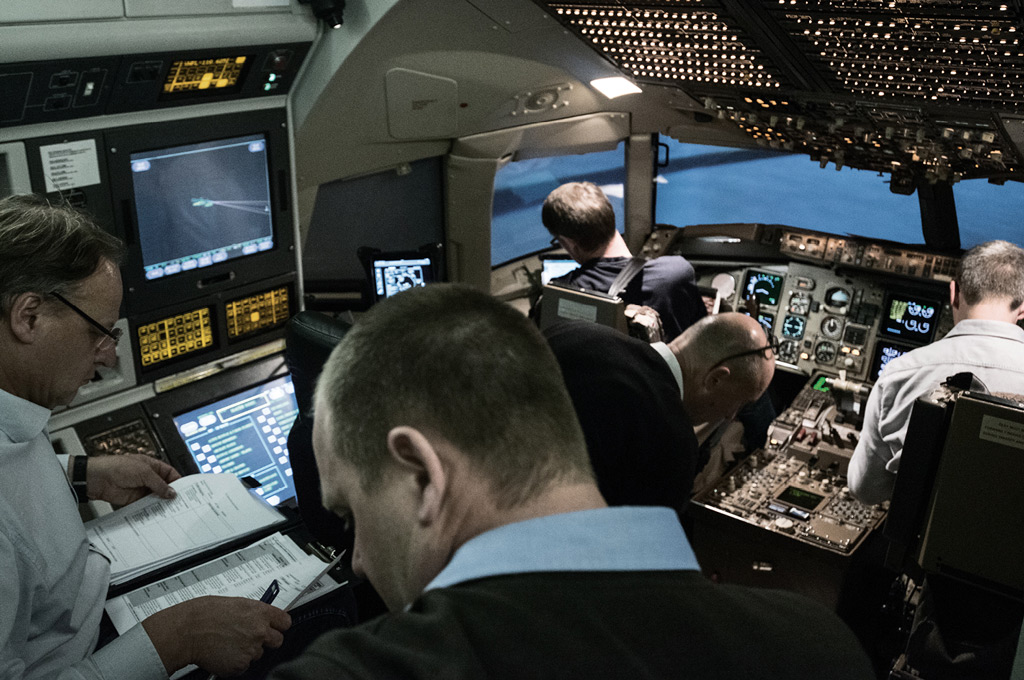 The careers of Commander Ib Jakobsen and First Officer Sune Groennebaek were on the line and over a short period they would face several ‘bad days at the office.’ There would be a number of take-offs and number of landings. With simulator training the two actions don’t have to correspond. On four occasions, at a critical moment, an engine would fail; each pilot in turn would have to react and get the plane safely back on ground. Ib pointed out that the simulator was actually tougher to fly that the real thing. In both cases a safe landing was the principal aim, but all the time Claus Valeur, Head of Training for Star Air, was looking for more from the exercise. Evaluating not just how they did it, but how they went about it, the degree of competence and quality of communication.

This story is not about Ib and Sune so let’s say right away that they did well and flew past the pass mark – a pass mark that with Star Air is set higher than that required by the Danish Civil Aviation Authority.

‘On a bad day,’ explained Claus, ‘you can have a dip in one part of the test, maybe there is something else going on in your life. We set the mark high so that that dip is still above the required level.’ 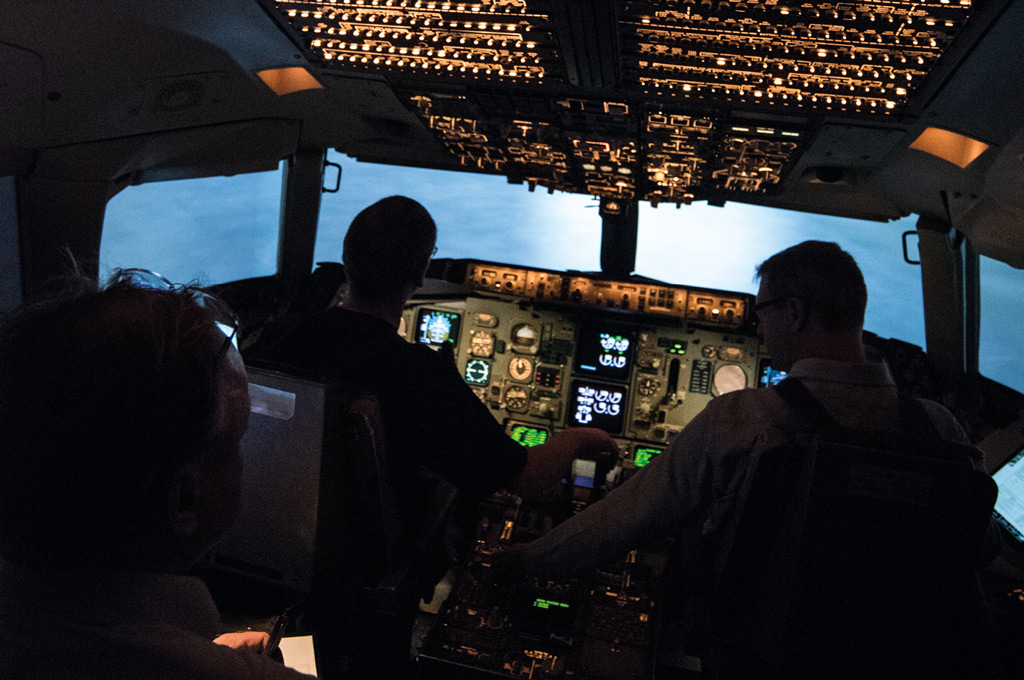 The day-long session also invol­ves briefings and open discussions about all aspects of aviation and working for an airline like Star Air – they are a part of the Maersk group, fly the company’s executive jet and have twelve 767’s which operate on a long-term lease with UPS. Their routes are regular with the main hub Cologne.

For the purpose of the simulator exercise the departure point was Bergamo in Italy’s Po Valley, an important airport and one that gives any crew something to think about, especially if you keep losing one engine. North east of Milan, it has the Alps immediately to the north and suffers from frequent fog.

New Role of the iPad

Briefed and ready Ib and Sune, stepped up for the session and swopped roles and duties, if not seats. Since there are ten more commanders – they used to be called captains – with Star Air than first officers, scheduling occasionally means that two commanders will sit up front. In that situation they have to fully be able to perform the first officer’s role. Check lists are the backbone of situational management on board – each scenario triggers a different list and approach. One aspect that has changed in recent years is what the officers carry in their briefcases. It used to be masses of documentation and flight plans, today it is an iPad. Clipped into position it is a vital source of information.

Standing behind the strapped-in officers, Claus performed a number of roles simultaneously – he was in control of the simulator, but also observing every moment from both a technical review and human factors point of view whilst at the same time acting as flight controller responding instantly to requests with the most detailed of information. It was an impressive performance burying forever the belief that men can’t multitask.

What Frank started to see was deeply revealing. ‘If we take the aviation industry as the gold standard, which it is, then I think in ways we, in our People Skills Department, are trying too hard. What I mean is that we have made or information collection and evaluation too precise, too focused. What I saw with Claus was how he gained a holistic view and through that probably a more accurate overview and picture, yet he did so by keeping the process simple.’

The simulators are aircraft specific and not cheap. A Boeing 767 Freighter costs $185 million, the simulator itself in the region of $30 million. Incidentally the simulators are aircraft specific, when demand for the plane recedes, they too face being mothballed. That’s not on the radar since Star Air have 60 pilots and 50 first officers, so that means they need 55 exercises, twice a year, 440 hours in the simulator. Then they are just one of 74 of airlines who fly them and although superseded by the 787 Dreamliner, they are still in production. The most produced airliner of all time is the Douglas DC3 – the last one of 16,079 rolled out in 1952, but today a handful are still flying. 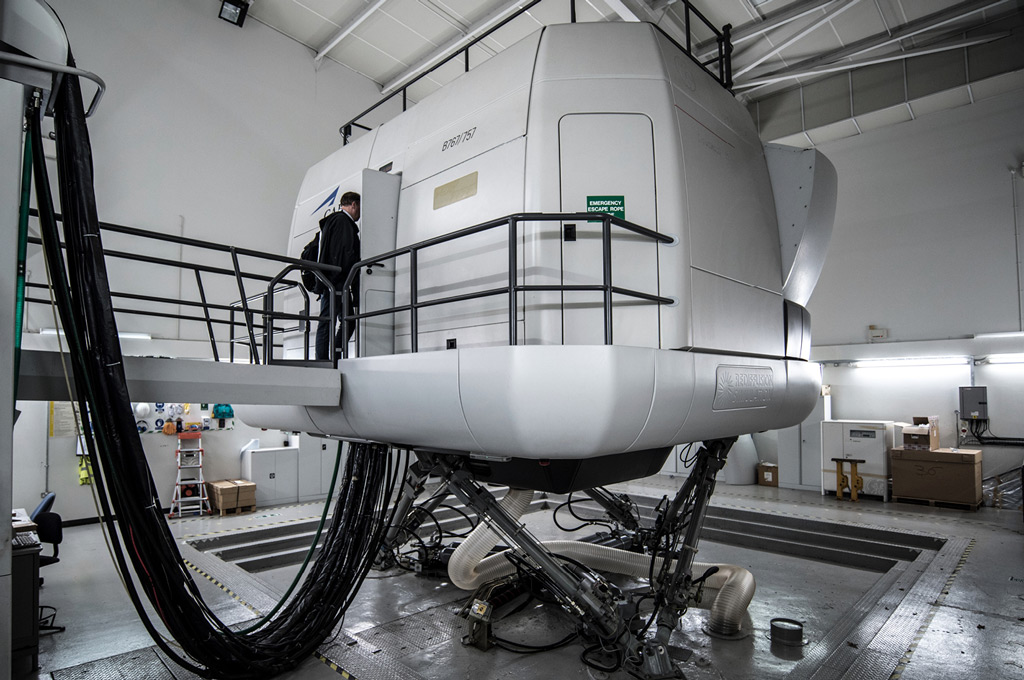